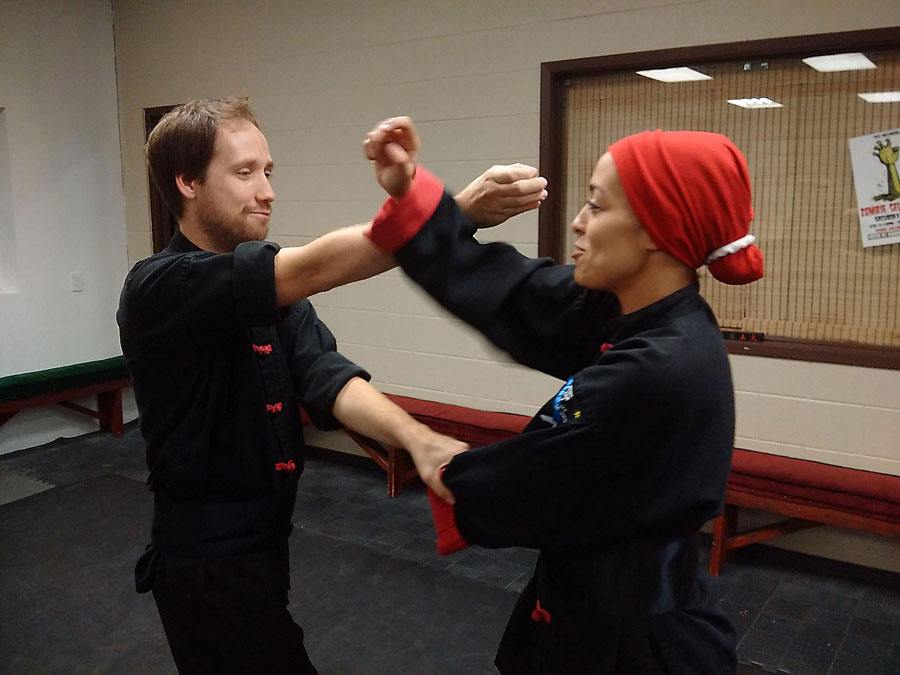 Mastering Praying Mantis Kung Fu has been one of the proudest and most important accomplishments of my life. If had to condense 2 decades of training, teaching, and self-discovery into a 20 minute conversation, I would explain the strike first principle, and then let the person on the other end of the conversation unpack it in their own way over the next 2 decades.

Warning – not a sob story

When I was in my late teens and early twenties I had a very interesting time living at home. My father was an alcoholic at that time. I’m not going to go into a sob story here about how rough these years were. That is not my intention. This is more of an uplifting story. I instead want to express the power of getting up early, and striking first.

As a family, my dad was leading us on a path of rebuilding after a long state of depression, financial ruin, and constant lack. My father is one of the most inspiring people in my life. During this time, while he was tied to this destructive habit, he was incredibly functional. He still managed to work hard and build back up a life of wealth that I had not experienced growing up. I attribute this in large part to his ability to wake up early. No matter how smashed he would get the night before, he was always up early, ready to tackle a new day and a new plan.

This irritated me to no end. At that time, like many young people, I was up late the night before, chatting with friends, partying, playing video games, etc. As a result, my intentions were to be up at the crack of noon at the earliest if I wasn’t in school. These plans were regularly interrupted by him pounding on my door early, “Rob, wake up! You’re wasting daylight”. For years I hated this, but years later I came to witness how a functional alcoholic could build a life of wealth despite having a massive addiction.

Eventually, when my father chose to be sober, it was like throwing gasoline on a fire, and his growth multiplied, financially, physically, and spiritually. The lesson here is, that even with the monkey on his back, he was still successful because he chose to get up early and get moving while others were still asleep.

If I had heeded this advice in my late teens I would probably be much further ahead in my own development, physically, mentally, and financially than I am now, but like many, I had to relearn the lesson in my own time. Years later I would learn why this simple habit is so important. Dad was striking first. I will share an overview of that with you now.

In Praying Mantis Kung Fu and to a greater extent, Holistic Kung Fu in general, strike first means be proactive, take the lead, don’t react, don’t meet the opponent on their level, bring them to your level. Don’t wait for them to strike, move first and force them to react to you rather than vice-versa. This principle SHOULD NOT be interpreted as hitting people when you think they deserve it, or when they upset you. It means move proactively to redirect the tone of the confrontation. This principle should not be restricted to combat alone. Once you understand it properly you will see that it applies to all relationship. Relationships with an adversary, a partner, a group, and society. There is a difference between waiting for feedback and waiting and being reactive. Those two things should also not be confused here.

It would seem Bruce Lee understood the strike first principle (it’s worth noting he studied Praying Mantis Kung fu through the texts written by my teacher’s teacher, Wong Hon Fun) when he wrote “…attack [the opponent] on his preparation of attack”. This doesn’t have to be in the form of a punch or a kick, but it can be applied for any proactive gesture. If someone seems disgruntled, a smile and a hand shake could be an example of striking first. In an argument, offering a win-win alternative before any kind of name calling ensues is striking first. The sooner you strike first to overcome a confrontation the less likely it will explode and bring about unwanted consequences.

Dad was using the strike first principle in his relationship with society. Society often expects us to get up in the morning, brew our coffee, turn on the news, and react to the narrative that everyone else is reacting to. You are then expected to go to work being angry at the same things that everyone else is angry at.

This is an example of being reactive instead of proactive. In this case our opinions and mindset are assigned to us by the media, and our minds are filled with problems and conflicts that are not within our immediate control, leaving us powerless and unaccountable for our own actions and destiny. We are simply reacting to all the punches that life throws at us, one after another, hoping to successfully block enough shots to make it through until pay day. Dad was up and moving working toward his goals before he had a chance to let mainstream narratives tell him what to think or feel.

When you get up proactively and decide how your day will go, set your own mindset, your own plan, and your own activity, you will be striking first.

When you exercise, or meditate, or use mental rehearsal on your daily to-do list, you are setting your own tone and your own narrative for the day. You will be less likely to be reactive to the regular stresses that trigger negative emotions for most people. This is not just important for you, but as a leader for your family, you will be setting the example for the rest of your crew to do the same.

The late and great Zig Ziglar once said something along the lines of, a must for a happy and loving family is, when you put them to bed give them a kiss and tell them you love them no matter what. When you wake them up, wake them with a kiss and tell them you love them. In other words, put them to sleep with love and wake them up with love. Now at the time of writing this I don’t yet have children of my own, and if you do it might make it more difficult for you to digest this chapter, but just try your best.

After reading this idea by Zig Ziglar in his book “Raising Positive Kids in a Negative World”, I couldn’t help but implement this. Every morning I wake my wife up with a kiss and a cuddle, letting her know she means everything to me. I want this to be the first thing she knows when she gets up. For these few minutes or more I set the tone for our day, whether we’re going to be together or separate for the rest of the day.

This how you strike first with family. As a leader, you want to set the tone and the emotional direction for your crew. If you let everyone wake up on their own and ignore them until they come to you with problems, concerns, urgencies, catastrophes, then you may have fallen into a state of reactivity. You’ll be putting out fires all morning praying for the time when you are either gone to work or until they are all out of the house and leaving you alone.

Having a good morning routine for everyone can avoid this. Keeping the news or social media off, and instead discussing goals and tasks for the day, as well as hopes and expectations can keep the whole family proactive.

If you are more spiritual family, taking time to discuss your dreams from the night before can also be a great family exercise. In her book “Living the Field”, which I also highly recommend, Lynne McTaggart explains that many native cultures believe that your own dreams do not belong to you as an individual, but are a gift from your subconscious or super-conscious mind that belong to the tribe, and should be shared… provided they’re age appropriate, obviously.

Physical exercise together may seem like a stretch, but if you can pull it off it will do wonders for everyone.