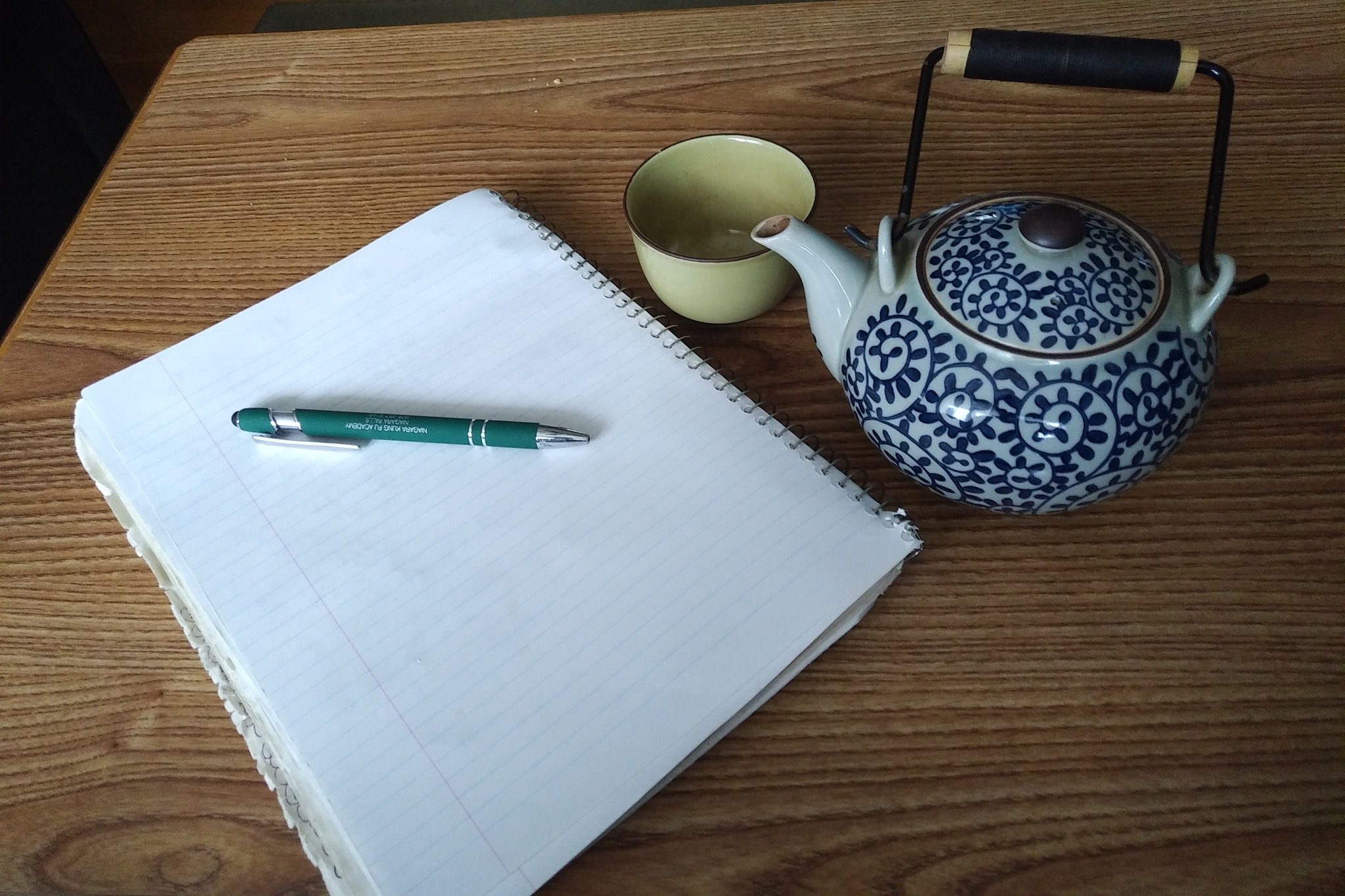 Mу program director, a high ranking Black Sash, had a friend, in her mid-twenties. She didn’t know where she was going. She didn’t have much aim at the time, had no goals, no direction. This friend was interested in Kung Fu though. My program director explained her job, her life style, how she teaches Kung Fu for a living. She explained how she sets goals, achieves them, and how she is in a state of constant never ending improvement. She asked her friend if that’s something she’s interested in. Her friend answered with an enthusiastic yes. “Good”, my program director said, “Get a notebook”. That’s how it started. This friend, Ms. Swift, is now a 2nd Degree Black Sash. She is a most excellent martial arts practitioner, and a fantastic instructor, but, if she never got that notebook though…

Connecting Your Brain to Paper

“…It may sound ridiculous, but my most important is to always carry a little notebook in your back pocket. I think the number one thing that I take with me when I’m traveling is the notebook… I could never have built the Virgin Group into the size it is without those few bits of paper.”

There’s something about the feeling of pen to paper, connecting your brain to a page in a visual way.  A laptop, tablet, or phone will never do this the same way. If you’re more visual, these connections can be more doodle-like, and if you’re more left brain and analytical, it can be more structured. Either way, taking notes is an easily customizable way to organize your thoughts in a way a computer cannot do. I’m not saying don’t use a computer, phone, or tablet for organization, but your first tool should be a notebook.

When I started with my first coaching and mastermind group of martial arts masters and martial arts school owners, I was flying to different states to meet and learn from a variety of other martial artists. Sometimes I would be stuck in a room taking copious amounts of notes for 10 or 12 hours a day. At that time, around 2008 if I remember correctly, I would look around the room and see everyone on their laptops, tapping away.

Meanwhile, I was furiously firing through pages of notes in my notebook as I was discovering better methodologies of teaching and operating. I’d like to say it was because I knew better, but it was actually just because I was too broke to afford a laptop at the time. My credit cards were maxed out to get to the meetings in the first place. This ended up being a huge advantage. As I learned from different experts at the meeting, I was able to put important lessons in place with the right emphasis that would help prioritize planning and action items in the future.

The brain just works better when it’s connecting to the page directly.

After 10 years of attending different group meetings with other martial arts school owners who are in the top of our industry, I’ve gradually noticed fewer and fewer laptops on the tables, as this idea is becoming more common knowledge.

I, like Richard Branson, although I’m not a billionaire, attribute most of my success as a teacher, leader, manager, and business owner, to my notebook, which I carry just about everywhere. I make my instructors bring a notebook to every type of meeting we have, whether it’s casual or more formal. When a student asks a question, I am much more comfortable answering if they have a notebook nearby, because they are more likely to write down the advice, and keep it, permanently, so I won’t have to answer the same question twice.

As simple as this sounds, and it might sound just too simple, there are many reasons to keep a notebook handy at all times. Have you ever had an idea for something just pop into your head? Maybe an invention? Maybe an idea for a song? A movie? A story? Have you ever gone through that depressing event where you didn’t act on it, you didn’t write it down, you didn’t record it, and then you forget it, and a year or two later you find out that someone else had your same idea but they actually implemented it? If this has happened to you, don’t let it happen again. If it hasn’t yet, don’t let it happen at all.

Ideas can come at any time, in any form.

When inspiration hits it can come with a lot of potential. If we don’t capture them though, they can be lost just as easily. Having a notebook can capture these ideas quickly, so you can revisit them later when you have time and a quiet place to review them, play with them, and plan properly.

This is an exercise that can get stronger with practice. Just like intuition. If you follow your intuition, it will give you clues on taking actions and saying the right words. If you ignore it, it will eventually leave you alone to your purely left brained mechanical thinking. Inspiration is the same way. When inspiration hits, and you follow up with it, it will flow to you more often. If you ignore it, it will go knock on someone else’s door. Writing it down immediately is a great way to say to inspiration “I’m listing, please keep the ideas flowing”.

When I was about 5 or 6 years old, I was spending a vast amount of my summers at my grandparents’ house, who lived close by and had a pool, so they made the perfect babysitter. At one point, I must have gotten tired of terrorizing around the yard, I came inside, into the sun porch to find my grandmother sitting in her deep slightly reclined sun porch chair, with her elbow on the chair’s arm, resting her head in her hand, with her pinky and ring fingers curled up between her nose and mouth, and her ring finger and index finger extended upward to her temple. I remember finding her hand position interesting. She was just relaxing in thought, in her natural way, but I found it peculiar, so I asked her what she was doing. “I’m just thinking” she replied.

Up until that point in life, when I was so active and hyper, I didn’t realize that just sitting and thinking was an option. “Wow, how cool”, I thought to myself. As a kid though, I thought it was somehow linked to having your index and middle finger pointing to your temple in order to do it, so when I sat down to think, I always put my hand positioned in the same way, since I thought that was how you activated your brain to just think. To this day, I still make that same hand position to sit and think, involuntarily.

I spend a lot of my time sitting and thinking, which has served me very well, but it all started with modeling this physical behavior. It later turned into modeling the internal mental behavior as well. I can’t remember the amount of times I ignored my grandmother telling me to sit quietly, but I can remember the one time I actually learned to on my own, because of her example, without her having to tell me anything.

What they see, not what you say

As a parent, your children will always learn much more from you, even subconsciously, through your actions, rather than through your words. They will model your behavior consciously and unconsciously until they form powerful habits. You cannot control which habits they pick up from you, all you can do is display as many positive habits as you can to increase the probability that they will pick up a net positive assortment of them.

Using a notebook as described here will be a powerful habit for their long term success. There is no need to make a chore out of it for them. If they see you using a notebook regularly, in the morning with your coffee or tea, or at night after dinner and clean up, they will eventually pretend to do the same, scribbling in something with crayon or asking you about it. If they’re asking about it they’re ready to learn and model the behavior, at which time you can explain that you write down all the brilliant ideas that come to you when you are thinking and daydreaming, and that they can do the same.

Sifu Atalick has owned and operated the Niagara Kung Fu Academy since 2005 and has been teaching Holistic Kung Fu for 20 years. Holistic Kung Fu as taught at NKFA helps kids and adults build self-discipline, confidence, and focus, helping them to achieve higher levels of success and fulfilment academically and in their careers. Students learn effective self-defence while designing a fit and healthy physical, mental, and spiritual lifestyle